The trademark “Green Rush” is on in Canada

While marijuana has been legal for medicinal purposes in Canada since 2001, the marijuana industry has only recently seen a high level of trademark activity.   Annual trademark filings for marijuana-related goods and services began accelerating in 2012 and there was much activity from 2014 to 2017.  This uptick largely coincided with regulatory changes that placed production of marijuana in the hands of a limited number of large-scale growers rather than the small-scale operations that had previously serviced the market. 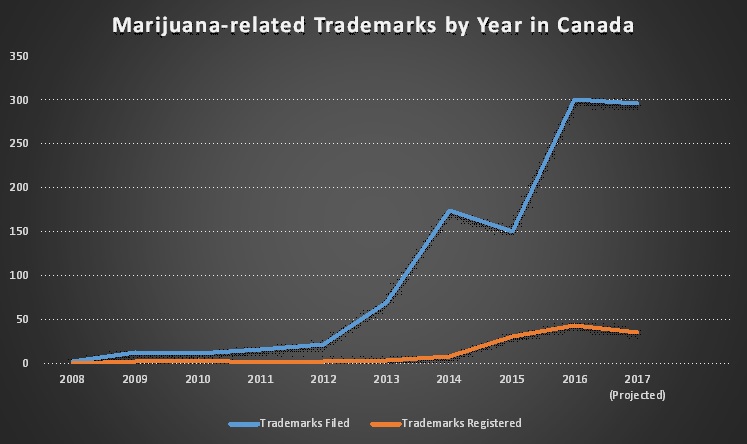 For example, In re Morgan Brown Ser. No. 86/362,968 (TTAB July 14, 2016) involved the trademark “HERBAL ACCESS” which the Applicant sought to register for “retail store services featuring herbs.”  While the Applicant did not specifically recite “marijuana” or “cannabis” in the trademark application, the Applicant submitted a specimen of use which showed a green cross prominently displayed at the Applicant’s retail establishment.  The Trademark Trial and Appeal Board (“TTAB”) pointed to various websites as evidence of the fact that the “green cross has become the symbol of the organized medical marijuana industry.”  The TTAB also noted that the Applicant’s homepage invited customers to “stop by today and find out why people consider our marijuana to be the best!”

The Applicant argued that the trademark application did not recite “marijuana”, it only recited “herbs” and there was no evidence of use of the trademark with respect to marijuana.  The TTAB was not persuaded by this argument, noting that marijuana is an herb and that the Applicant sells marijuana.

The TTAB stated that the Applicant’s services include the provision of an illegal substance in violation of the Controlled Substances Act.  The TTAB further stated that regardless of individual state laws that may provide for legal activities involving marijuana, it is a controlled substance under federal law and the Applicant’s activities are a violation of federal law.  Consequently, the refusal to register the mark was affirmed.

In another precedential opinion, In re JJ206, LLC Ser. Nos. 86474701 and 86236122 (TTAB October 27, 2016), the TTAB highlighted the fact that marks that are directed to marijuana paraphernalia are also unregistrable.  The Applicant sought to register “POWERED BY JUJU” and “JUJU JOINTS” for vaporizers and a “vaporizing cannabis delivery device”.  Interestingly, the Applicant explicitly identified the goods as vaporizing devices for cannabis or marijuana.  The TTAB pointed out that the Controlled Substances Act makes it unlawful to sell, offer for sale or use any facility of interstate commerce to transport “drug paraphernalia”.  The TTAB noted that equipment that is primarily intended or designed for use in ingesting, inhaling, or otherwise introducing cannabis or marijuana into the human body constitutes unlawful drug paraphernalia under the Controlled Substances Act.   On this basis, the TTAB affirmed the refusal to register the marks.

The difficultly in registering marijuana-related trademarks in the United States has sometimes caused Applicants to take unusual measures such as attempting to register all such trademarks at the state level.

The unique difficulty in registering marijuana-related trademarks in the U.S. does not extend north of the border.  In fact, trademarks have been recently been registered in Canada for use with medical marijuana and cannabis, various food products and drink containing cannabinoids, retail sale of cannabis and its derivatives, and vaporizers for use with cannabis.